Concrete accounts for the single most material used in construction of structures due to its high compressive strength, its easily available, great cost efficiency, its ability to be pre-cast or cast insitu.

The great proportion of concrete structures are left uncoated as concrete in normal atmospheric conditions is highly durable.

Concrete, being inorganic is strong and resists abrasion however it does have some drawbacks, including; poor resistance to acidic solutions, poor tensile strength, its porous and will allow contaminates to soak into the concrete.

It’s for these reasons that concrete deteriorates and requires preventative measures such as the use of protective coatings.

Concrete cures through hydration. This means concrete requires water to cure and this is why you see fresh poured concrete being wetted with water or wet fabric laid on fresh concrete to prevent the water evaporating away too quickly.

Concrete undergoes many separate chemical processes during its curing cycle. Mostly it is a process of cement and water crystallizing to provide a glue to hold concrete aggregates together. 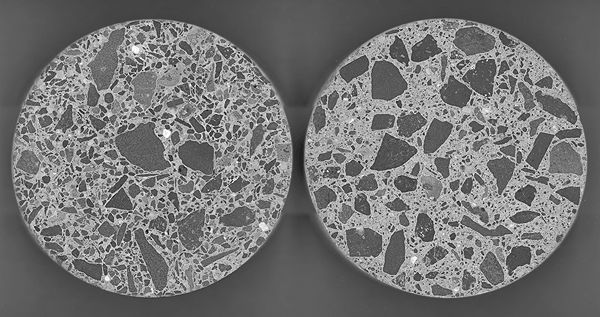 The use of steel mesh is great to reinforce and provide tensile strength to the concrete. This combination of materials works well since concrete is alkaline and typically provides a PH of 9 to 13. This alkalinity passivates the steel from corrosion by inhibiting the transfer of anodic ions (anions). By inhibiting ionic transfer the corrosion cell is slowed.

Concrete will continue to cure in the presence of carbon dioxide (CO₂). This ability helps concrete to ‘self-heal’ in micro cracks as a fine crack will present a fresh concrete surface for the CO₂ to diffuse into thus the fresh surface will undergo additional cure and thus grow its crystalline structure in the crack. 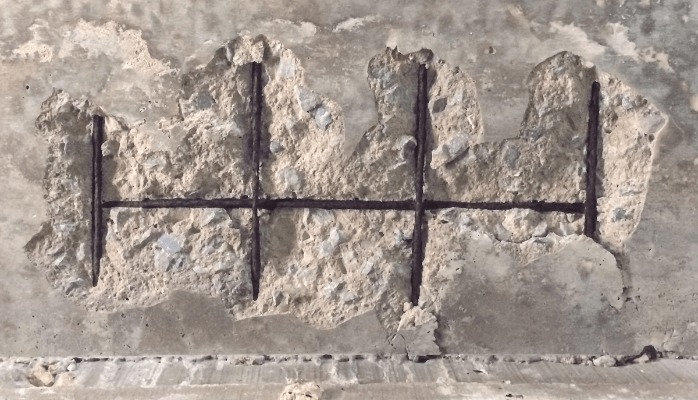 The result of carbonation is a lowering of the concrete PH. However in reinforced steel structures when the PH of the concrete is reduced below 10, steel in concrete is no longer being passivated thus enabling corrosion of the steel to occur.

Additionally, concrete being a porous substrate, enables contaminants such as chlorides to migrate to the reinforcing steel. This further encourages corrosion.

As the steel reinforcing commences corroding the corrosion products swell the size of steel and push the rigid concrete away from the imbedded steel. This is commonly referred to as; spalling concrete or concrete cancer and presents as concrete delaminating and falling off the structure along with visible rust stains from the corroding steel.

Remedies- RemedyAP can tailor a concrete repair specification that may include; migrating corrosion inhibitors (MCI) that will travel to the reinforcing steel and re-passivate the steel, corrosion removal of exposed steel, anchoring new reinforcing steel to damaged areas, installation of cathodic protection systems, cementitious or epoxy mortar to fill damaged areas, application of anti-carbonation protective coatings.

Concrete being an alkaline substrate is suitable in alkaline service conditions however when exposed to acidic solutions concrete will readily dissolve.

Two examples of where these conditions exist are;

Acid bunds – A bund is structure that is built around a vessel or tank to provide secondary containment. In the event of a spill or tank failure the hazardous contents will be contained within the bund. Concrete is a natural choice for this type of structure however will require protective coatings to separate the concrete structure from the corrosive contents of the vessel. 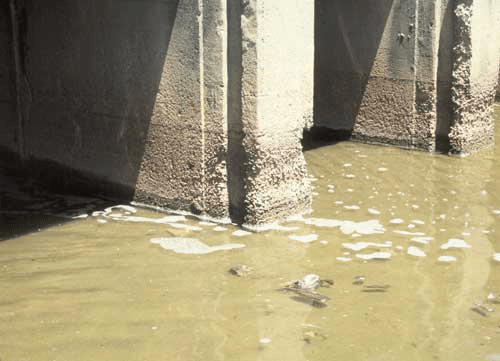 Waste water sewers, pump stations and maintenance holes – Organic material that is decomposing produces hydrogen sulphide gas (H₂S). In the presence of moisture the H₂S gas produces a sulphuric acid. Waste water facilities are well suited to the benefits of concrete construction and this acid solution will aggressively dissolve the concrete structure above the water level of many concrete waste water facilities. The use of protective coatings will protect the concrete from acid attack.

Remedies – RemedyAP can tailor a concrete repair specification to your needs which may include; epoxy mortar to replace dissolved concrete, epoxy lining or poly urea lining or vinyl ester glass reinforced coatings.

There are two types of concrete cracking;

Static cracks – These are cracks that have occurred but have ceased moving. Static cracks allow passage of water and contaminates to the reinforcing steel allowing corrosion to commence however they are relatively simple to repair. 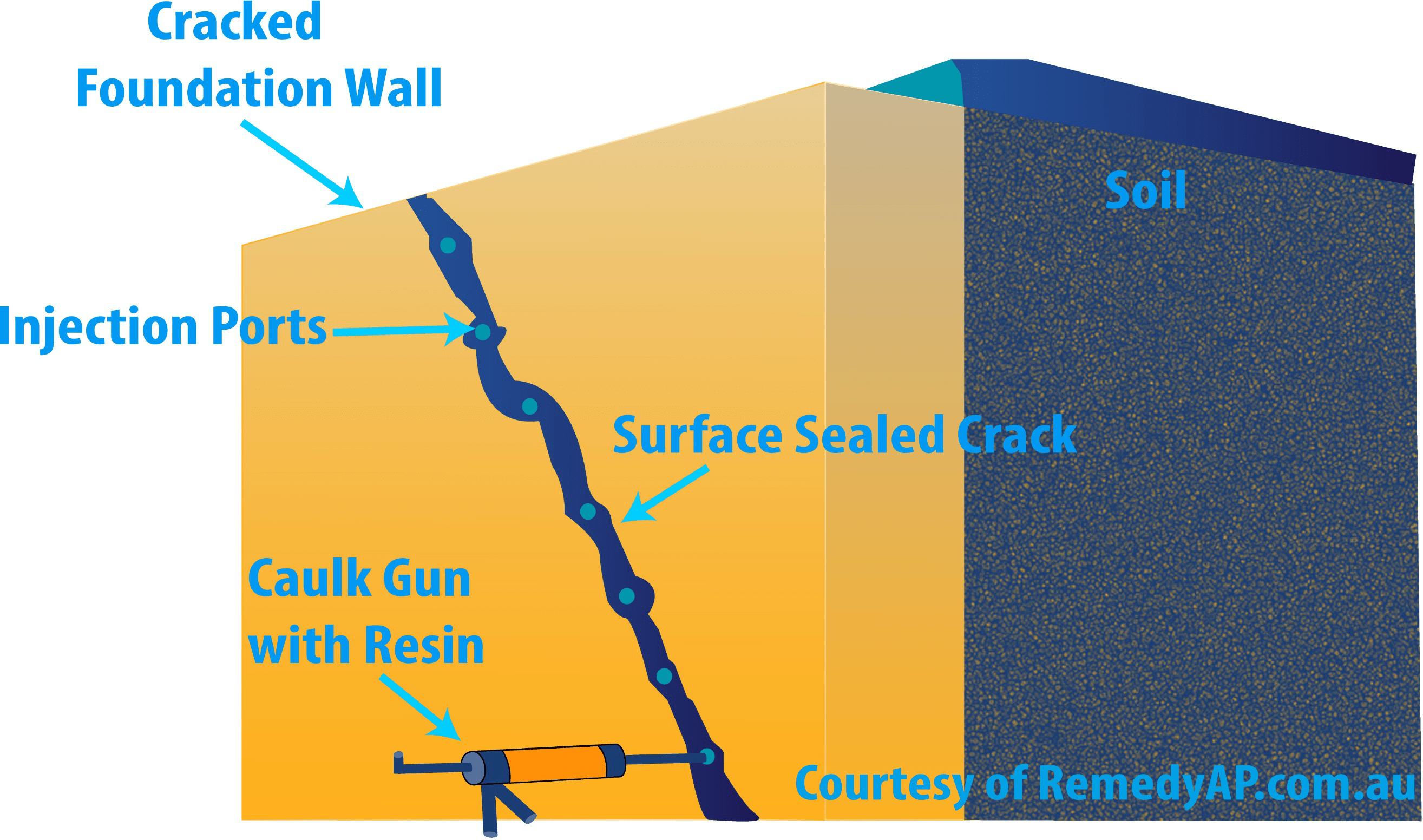 Remedies – Static cracks can often be repaired by resin crack injection. RemedyAP will provide a condition assessment and audit the concrete damage in order to size up the appropriate equipment. Small and shallow cracks can be attended to using cartridge guns however on larger structures, high pressure pumps may be needed to force the epoxy throughout the internal passage of the cracks.

Dynamic or active cracks – These are cracks that will undergo movement either through temperature cycling or with changing ground conditions. Active cracks need to be assessed individually to provide an appropriate remedy.

Remedies - RemedyAP’s condition assessment will provide advice on how to treat each defect which may include; installing saw cuts, expansion joints, articulated joints, sheet gaskets, protective coatings or elastomeric barrier coatings such as; Polibrid™ or Poly Urea.

Concrete with high surface moisture will repel coatings resulting in localized or widespread failure. There are a number of tests that can be performed and its essential to understand their application in order to specify the best test for your situation. Remedies – RemedyAP understands how surface moisture tests differ from concrete humidity tests and will guide you through the options to guide your project to success. Available tests include ASTM F2170 test for relative humidity using insitu probes, ASTM D4263 plastic sheet test, ASTM F2659 use of surface moisture meter, etc.

Remedies – Laitance is removed using either high pressure water jetting or wet abrasive blasting. Once removed it’s obvious how well this defective layer obscures many voids and cavities that would otherwise be cause for subsequent failure mechanisms within the protective coating layer.

The concrete substrate is a structural element that requires surface finishing prior to effective application of protective coatings. Items for rectification are; protrusions, excessive surface voids and installation of expansion joints.

Remedies – RemedyAP’s concrete repair specification will detail how to treat each defect which may include; epoxy mortar repairs, grinding of protrusions, saw cuts for expansion joints.

A coating transition is where a protective coating either; a)Terminates or ends at the edge of the structure. b)Transitions from one concrete surface to another. IE from wall to soffit or from wall to floor. c)Transitions over two separate substrates such as; expansion joints, pipes or metal columns.

When coatings are applied correctly, failure mechanisms are reduced to these transitions and terminations. These are the secondary areas of coating failure.

Remedies – RemedyAP’s concrete repair specification will detail how to treat each interface which may include; providing saw cuts to anchor reinforced coatings along each transition and prevent moisture creep, alternative surface preparation methods to ensure adhesion to the secondary substrate, installing a movement joint to allow for differential movement between two substrate material types. 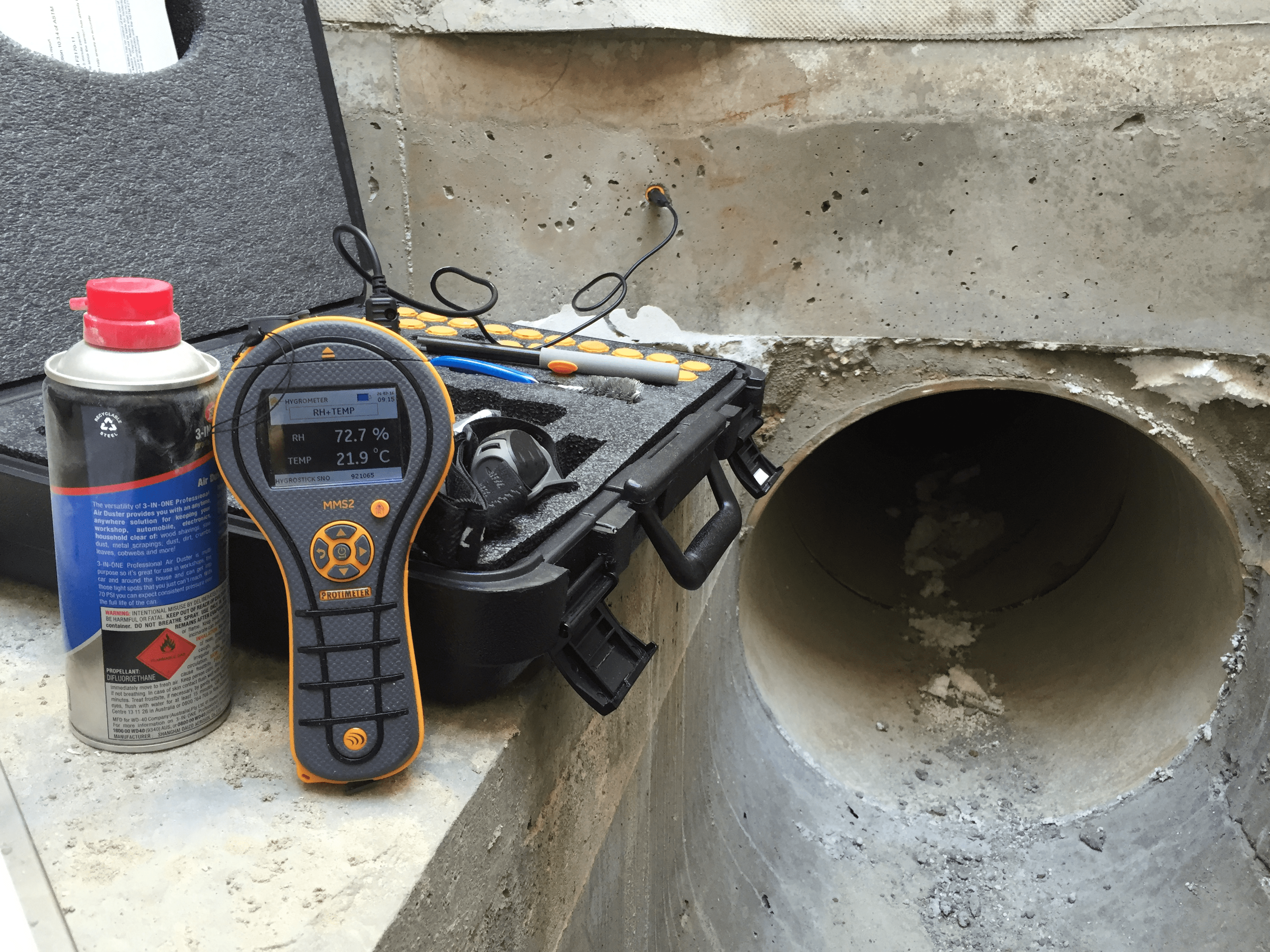 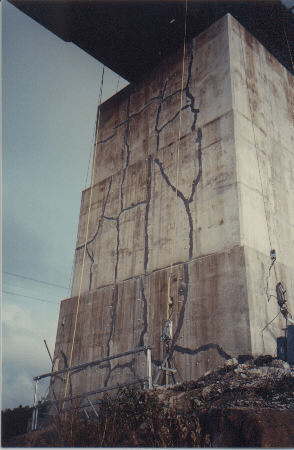 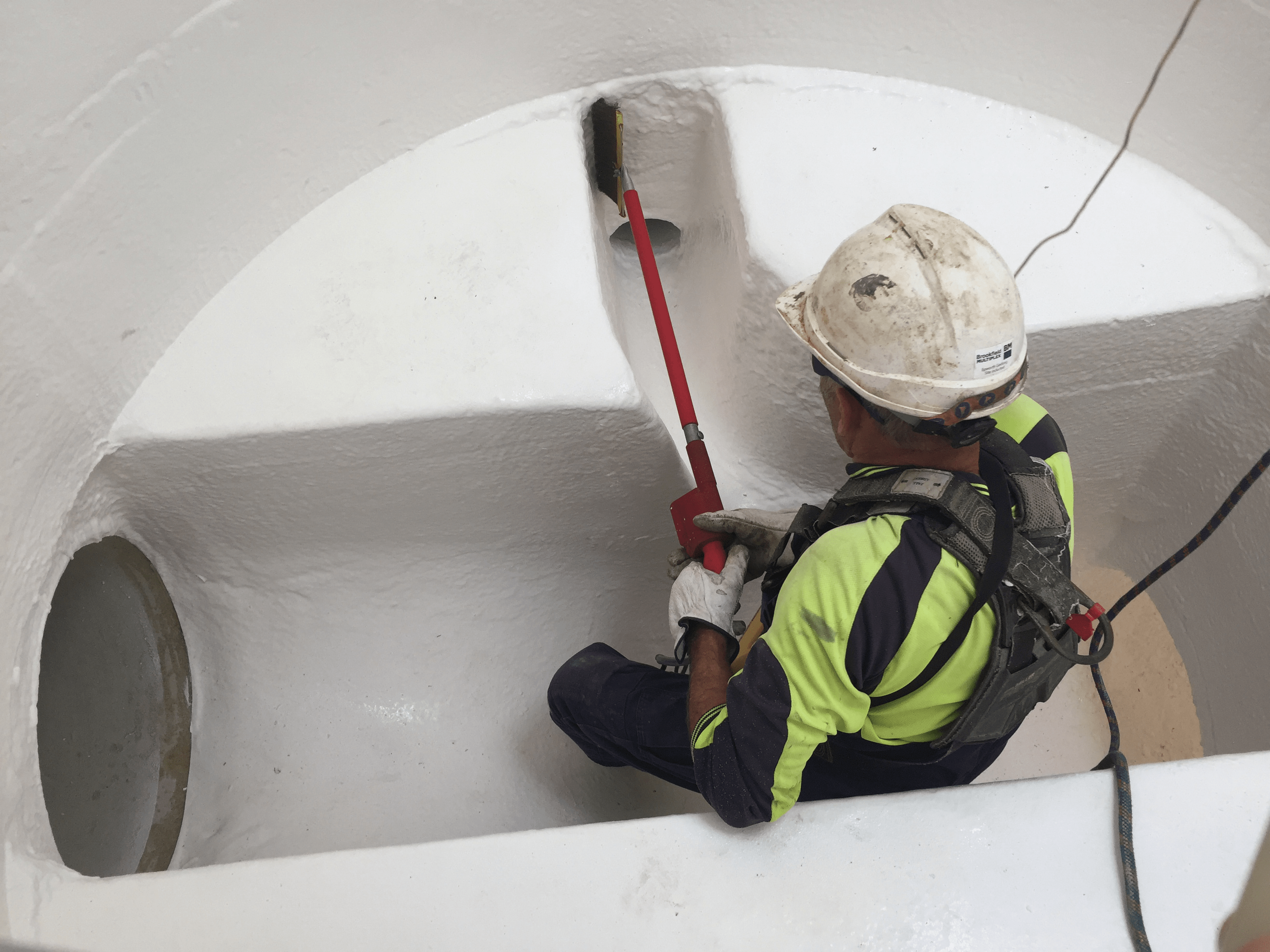 Remedy Asset Protection (RemedyAP) can provide you with;

A detailed condition assessment – For existing concrete structures that have undergone some degradation, our staff will inspect, provide concrete testing, measure and audit all concrete defects observed on a structure.

A scope of works – Once a design assessment or condition survey is completed the Client will nominate which options they approve and our staff will build a scope of works for the Client to use in contract negotiations. 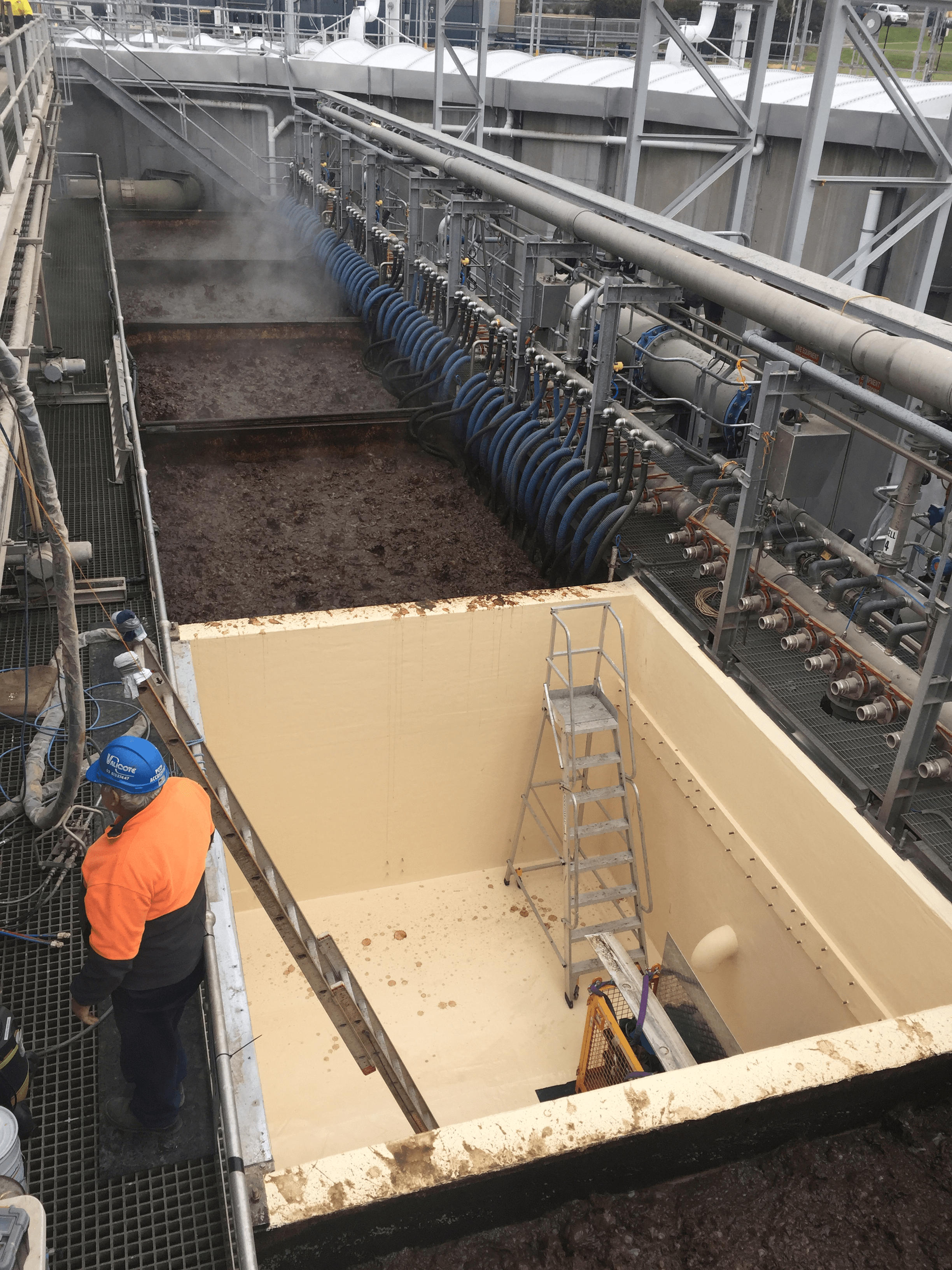 Tendering management - From here our consultation will provide a strategy for the Client to approach the marketplace, from tendering management https://remedyap.com.au/tendering-management-services-australia through to final project delivery. In consultation with the Client, RemedyAP will identify what solutions the Client can address using in-house project management and identify which areas where there is a skills gap where RemedyAP can provide concrete inspection services and other third party solutions.